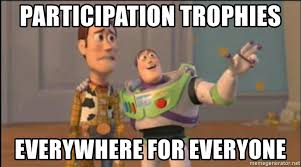 When our kids were growing up in the early 2000s and 2010s, every player in every team, in every league, in every sport, received a medal and even a trophy, just for participating. There was barely a recognition of the team or player who performed the best, who won the gold medal through skill and effort; "everybody was a winner".

Fast forward to this worldwide-once-every-hundred-years pandemic, with hundreds of thousands of businesses destroyed by shutdowns, millions of quality employees without work, and you notice that the kids that were raised with a sense of entitlement, those who always "won", even if they never won a game,  have come face to face with the real world, where there are a few winners and many losers, where life is hard and “making it” requires effort, lots of it.

In these very challenging and rapid-changing times, we are seeing many examples of kids that were raised to value hard work, persevere in the face of adversity and adapt to change without crumbling, succeeding and standing out.

If you want to give your young kids a competitive advantage in the real world, do not give them participation trophies.

Alejandra Peraza de Halvorssen
I am a wife and a mom and active realtor. I tend to smile most of the time. I try to be patient. I like to exercise. I get along with people. I am not afraid to stand up for my values. I am in my 40s. I like to bake cookies, brownies and cakes. My favorite color is green. I enjoy listening to classic, pop or latin music. I love to read. I used to be a bond trader, so I like quick answers. I can have a very tight schedule. I am organized. That's me.